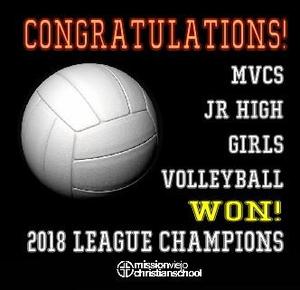 Click to read more about MVCS's 2018 League Champion Junior High Girls Volleyball Team.
Under the guidance of Coach Dawn Rentrop, MVCS Junior High Girls Volleyball Team advanced through three playoff rounds to get to the championship game. They won each round, including the championship, in just two games per match. Some of the games were nail-biters with the girls coming from behind to win, but regardless of the situation, they persevered as a team in the end and were victorious. Congratulations! Your dedication and team work earned you the CHAMPIONSHIP title!