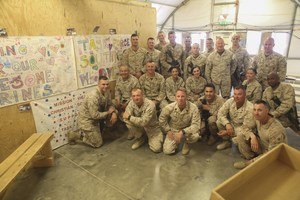 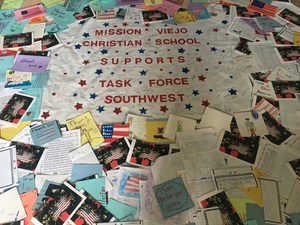 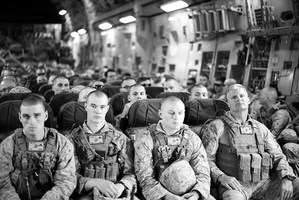 On April 13, 2017, just three days before Easter, Colonel Matthew Reid and a group of approximately 300 Marines from Camp Lejeune, North Carolina, departed for a nine-month deployment to Afghanistan. Known as Task Force Southwest, their mission is to help the Afghan Army, police, and government re-gain security from the Taliban in Helmand Province. It is a dangerous mission and Mission Viejo Christian School has pledged their support and prayers for these brave men and women. (Click the title for the rest of the story.)
Colonel Reid, now the commanding officer of the 6th Marine Regiment, 2nd Marine Division in Camp Lejeune, NC, was stationed at Camp Pendleton ten years ago and had the opportunity to meet Principal Bob Sladek and Assistant Principal Kari Hollerbach then. He and his fellow Marines experienced firsthand the kindness and generosity of Southern California Christian schools when they were deployed to Iraq for thirteen months in 2008 and Afghanistan for seven months in 2010. Colonel Reid credited this support with helping keep his Marines alive, claiming that, when deployed troops get care packages with snacks and gum and hand written notes from kid's calling them heroes, saying they are praying for them, it energizes them. That extra push or alertness, could be the difference between life and death! Naturally, when Colonel Reid found out he was deploying again, this time with 300 Marines, he knew who to go to for support.
Through the month of May classes learned about this school-wide mission project and committed to praying for the Marines of Task Force Southwest and all of our troops. They made cards, wrote letters, signed banners, and donated items for care packages. The results was a mass mailing that arrived at Task Force Southwest's camp in Helmand Province just as they returned from conducting major operations in the area. God's perfect timing put our gifts where they needed to be, at just the right time. Colonel Reid sent the attached photograph of the banners MVCS sent, proudly hanging in their chapel and surrounded by some of the Marines from the Task Force, thanking us for all the care package items. Colonel Reid (shown in the photograph, kneeling, second from the left) said our banners are the only banners they have received to date, and they will remain hanging in this place of honor throughout their deployment. Attached are also photos of some of the cards and letters MVCS sent, and a photo taken just after Task Force Southwest landed in Afghanistan ready to begin their deployment.
When school resumes in August, MVCS will continue our efforts of collecting and mailing cards and care package items to the Marines. Over the next few weeks, please keep them, their families, and all of our troops in your thoughts and prayers. Col. Reid concluded his message to MVCS saying, "Again, please extend the gratitude of the entire Task Force to everyone back home...and have a trip to "In n' Out Burger" in our honor!!" God Bless America!